Aircraft and lightning strikes: here is what the statistics say 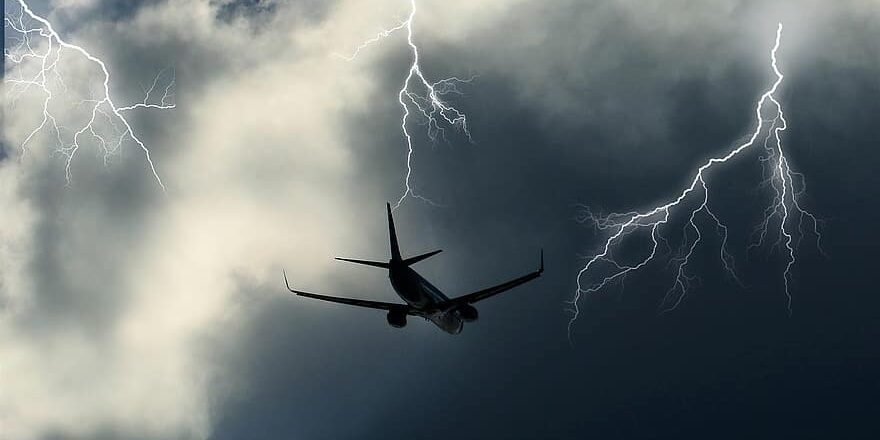 On average, every commercial aircraft is struck by lightning once or twice a year. Did you know that, in most of the cases, lightning strikes are triggered by the aircraft itself? If not, the statistics about aircraft and lightning strikes we are about to present are definitely for you.

Lightning strikes are a daily occurrence

At any given moment, there can be as many as 1,800 thunderstorms in progress. It translates to 40-100 lightning strikes every second worldwide.

Even though lightning activity can vary by geographic location, its frequency is such that, according to the International Air Transport Association (IATA), an aircraft is struck by lightning every 1,000 flight hours, the equivalent of one strike per aircraft per year.

It is interesting to note that lightning mostly strikes at near-freezing temperatures, during turbulence. Around 60 percent of all lightning strikes occur from March through July.

In most of the cases, lightning strikes are triggered by the aircraft itself. The reason is that lightning activity is more frequent passing through the clouds during the climb and descent phases of flight at an altitude of 1,524 to 4,572 meters.

Although it may sound terrifying, lightning strikes to aircraft are relatively common but rarely pose a threat to its continued safe operation: aircraft incorporate extensive lightning strike protection and are, therefore, prepared to withstand the occurrence.

The occurrence can cost airlines more than $ 2 billion per year

When struck by lightning, the aircraft must undergo a thorough inspection to ensure its airworthiness. Thus, prior to the next flight, the aircraft is grounded and thoroughly inspected for damage, affecting its availability.

It is estimated that the occurrence can cost airlines more than $ 2 billion per year in flight delays or cancellations.

Luckily, there is a solution to not only decrease the time of aircraft lightning strike inspections by 75% but also minimize the associated costs. Check it out!

Today, when an aircraft is struck by lightning, the result can range from little-to-no-damage. The occurrence can, however, be more serious, having resulted in extensive post-lightning strike repairs or even aircraft crashes in the past.

On December 8, 1963, for example, Pan Am Flight 214 was struck by lightning on approach to Philadelphia and crashed killing 81. The investigation carried out by the Civil Aeronautics Board concluded that a bolt of lightning struck one of the aircraft’s fuel tanks, causing an explosion and destroying one of the wings.

Despite the frequency of lightning strikes, crashes following such occurrence are rare. Do you know why commercial air safety became a long-term trend? Because all aircraft possess protection from lightning strikes and go through a series of rigorous tests to ensure they meet the safety standards. In fact, the rate of fatalities has declined far faster than public fears about flying!