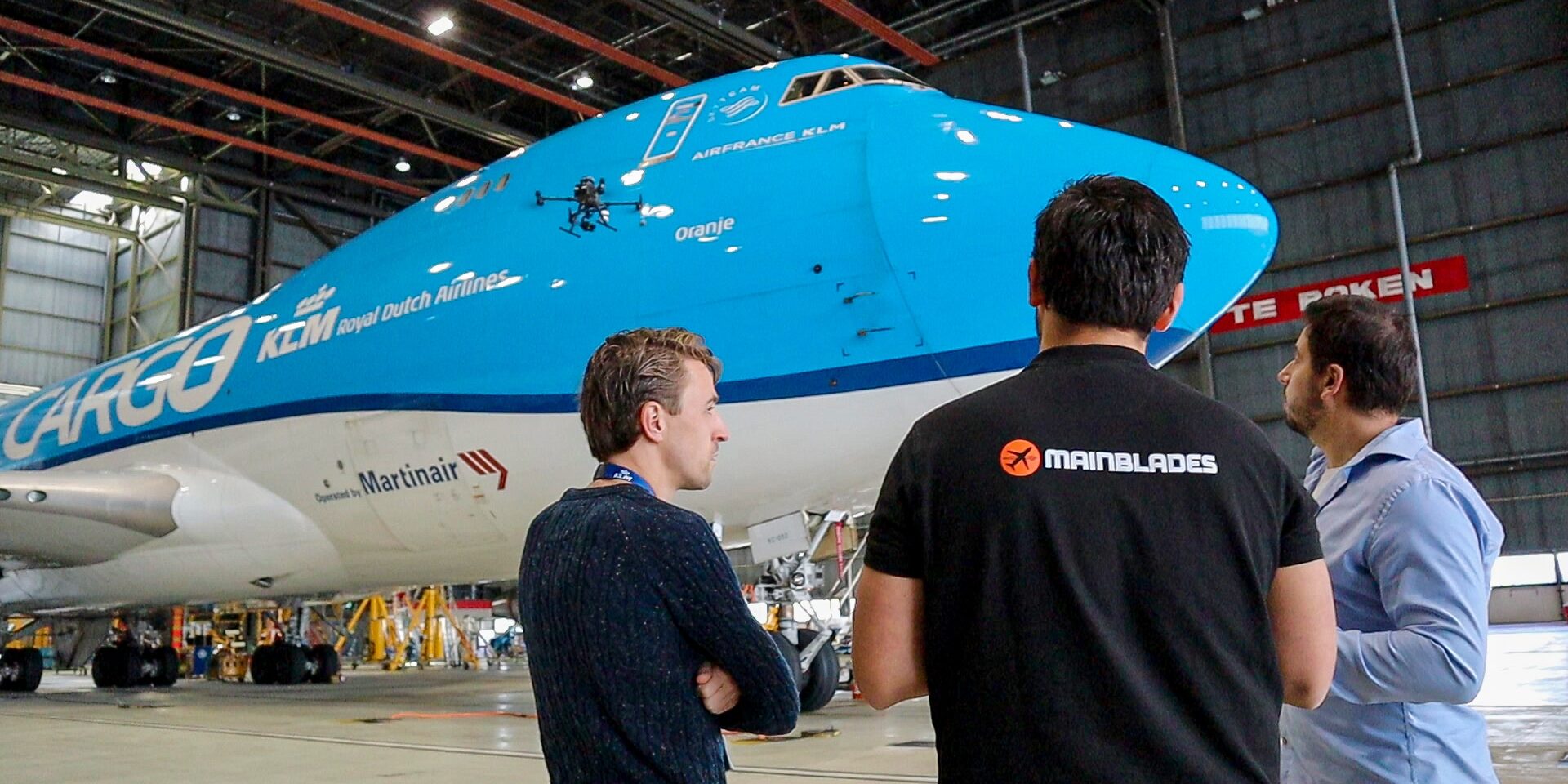 It’s official! Mainblades has extended its partnership with KLM Engineering & Maintenance (KLM E&M) to perform automated aircraft drone inspections. The two companies have an extensive history together and came a long way to introduce drone innovation in the aircraft MRO industry. Through a renewed multi-year agreement, the partners are now setting the foundation to make the technology fully operational and to take necessary certification steps required to inspect aircraft on a regular basis at Schiphol Airport.

For years, drones have been regarded as one of the most promising innovations in the aviation industry. KLM E&M recognised this potential early on. An earlier cooperation with Mainblades back in 2015 was focused on investigating the feasibility of this technology and demonstrating a proof of concept. After a series of successful tests showed the great potential for use cases such as GVIs and lightning strike inspections, KLM E&M has played an important role in the further development of Mainblades’ automated inspection solution. The feedback about needs of aircraft engineers as well as information regarding inspection processes paved the way for the product to become more mature over time.

The signing marks an important milestone in the history of the two companies. “We are excited about the upcoming period. We are leaving the experimental phase behind and will now focus on getting the drone fully operational for KLM’s entire fleet”, says Dejan Borota, CEO at Mainblades. “This is an important stepping stone in our strategy towards more efficient and sustainable maintenance operations at KLM E&M” according to Serdar Cifoglu, Lean Six Sigma Black Belt at KLM. “With several hundred inspections on average per year, the potential resource savings we are expecting are quite significant” he points out. Bas de Glopper, Innovation Manager from the KLM MRO Lab adds: “I could not be more excited about this new endeavour. The use cases are numerous because the Mainblades drone is a highly modular system. It works on any aircraft model, both inside and outside of the hangar, and most importantly, can be used while the regular maintenance operations are in progress. This flexibility is unique in this field”.

In the beginning of the cooperation, the partners are working on creating 3-dimensional, digital lidar maps of KLM’s A330, B737, B777 and B787 models. These maps are crucial for the drone to localize itself within the hangar and navigate around the aircraft safely. “This forms the basis to perform inspections with consistent data output, regardless of where and how the aircraft is parked”, Borota notes.

In a second step the partners are looking to to get the drone fully certified. The two core objectives for deploying the drone as alternative means of inspections are

The last step is to involve KLM E&M’s workforce. “We get the drone into the hands of the aircraft engineers who will be working hand in hand with our development teams”, Borota elaborates. “It is important that in this process we actively involve them so they can become familiar with the drone and understand how it adds value in their work flow”, says de Glopper. “We also want to make sure that its tailored exactly to their day-to-day needs”.

During this process, the partners are simultaneously looking to certify the drone as part of the aircraft maintenance manuals of Boeing.

“By joining forces, Mainblades and KLM E&M are showing the industry that aircraft inspections with drones are ready to be used on a day to day basis”, Borota notes. “Drone inspections at KLM E&M will be a game-changer. Our partnership has been beneficial to both parties in the past and we look forward to add further value to KLM E&M’s ambitious roadmap of digitalizing and automating their operations in the future”.