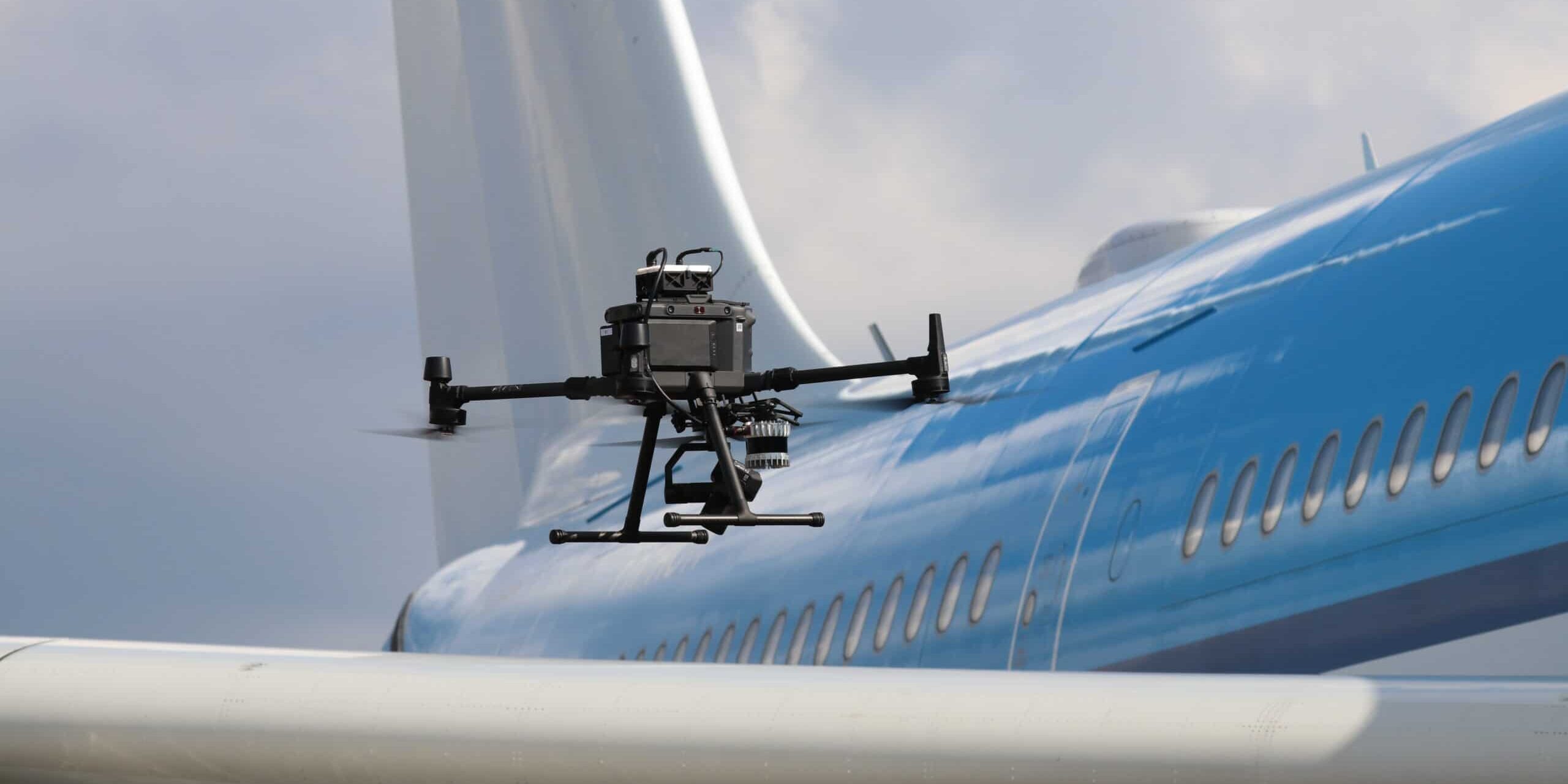 On Tuesday, August 3rd, Mainblades achieved a major milestone. For the first time in European history, a fully automated outdoor airport drone inspection of a commercial aircraft was performed at an active airfield. The autonomous inspection of an Airbus A330 was arranged in cooperation with Fokker Techniek, Truenoord as well as the Dutch Drone Centre / Aviolanda at the airbase Woensdrecht. All involed parties can look back together on a successful day.

Currently, Mainblades operates inside hangars only due to airport limitations regarding the use of drones. However, our team continues to validate the increasing interest for outdoor airport drone inspections as well. Equipped with our M300 drone solution, we therefore went to the air base in Woensdrecht on Tuesday. This airfield is an active military airport environment on which an Airbus A330 was made available for a drone inspection by aircraft owner Truenoord. Our drone took off with the job to to find damages on the aircraft surface and take pictures that show more than can be seen with the naked eye.

“The fact that we are doing this here at an open and active airfield is a European first,” says Mainblades Chief Technology Officer Jochem Verboom who just got back from a roadshow in America, demonstrating our solution to several large American airlines. While in the United States, drones are already used for pilot projects in front of hangars, they have never before flown outside of an active airport in Europe. That is going to change in the future, says Dejan Borota, Co-founder and Director of Mainblades. “If an aircraft lands and it is damaged on the way, for example by lightning or birds, it must now first go to a closed location such as a hangar. That way you lose a lot of time. Besides this, hangar space is expensive to rent and not always available. And that while a drone inspection can also take place in the open air.”

A uniform interest by the industry

In this regard, Borota points at the interest for this technology from a lot of different parties in the aviation industry. “One of them is the airlines who have their operational fleet. They want to inspect the aircraft in a minimum amount of time to reduce ground time and to optimise the fleet availability to have the aircraft in the air.” A second party is the MRO independent maintenance organisations doing maintenance work for airlines and other parties. “They have a benefit to make sure that the reporting interface and the reporting outputs, the results, are actually as consistent as possible and that the quality is the best possible.” The third part that is increasingly showing interest in this technology are the lessor companies. “Approximately half of the world’s fleet of aircraft is actually not owned by the airline’s themselves, but owned by leasing companies. And these leasing companies are actually involved when an aircraft has to go from an airline to an MRO, back to the lessor” Borota states. “At all moments they want to have an optimal picture of the status of the aircraft. So they’re interested in ultimate inspection and having a complete report of these inspections.”

Aviation is a very innovative and technology driven industry. But still, in 2021 it is mandatory to have paper records in place. Technologies such as drones will continue to develop and will help to modernise aircraft maintenance services. “Drones can make these processes much more efficient and coherent amongst all involved stakeholders” says Aris Promos, head of Marketing and Sales at Fokker Techniek. “We see time saving, we see money saving and we see less subjectivity, because we are working with human beings.” The demonstration in Woensdrecht was a full success. “Today we were able to prove that drones hold more advantages than just the time savings. All in all it was a great day and we are excited to continue to showcase our technology to the aviation community moving foward.”

If you’re interested to see our technology in action feel free to get in touch with us any time. We can arrange a demonstration and come to your facility and show you how our system can revolutionise your aircraft maintenance processes.