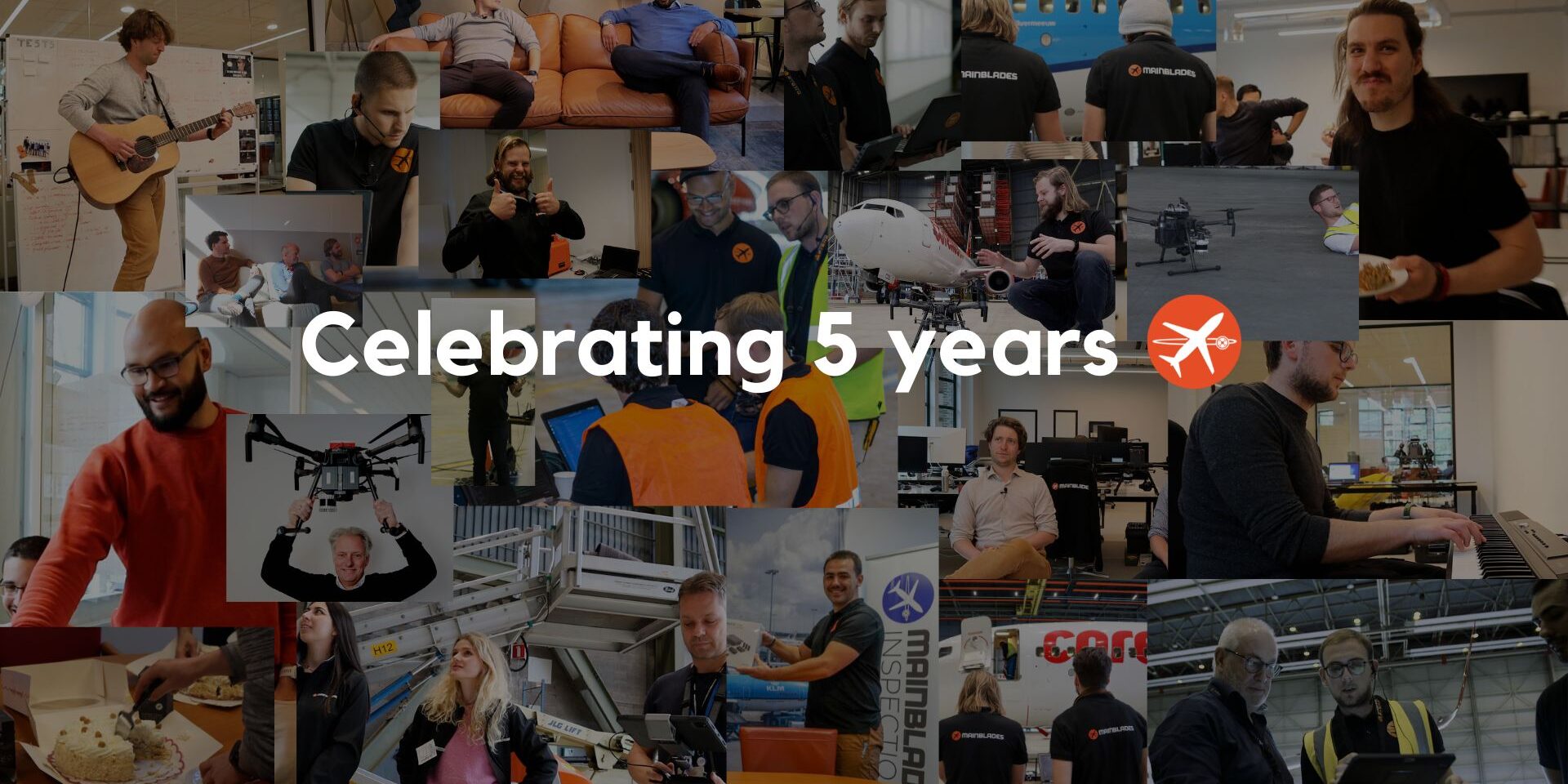 A very special year for us. We turn five! Five wild years to say the least with uncertainty, changes and major milestones all around. From the first proof of concept to flying in operational hangars every day. This is our story. Read on to get a glimpse into our past, present and future. Before you do, check out the anniversary video!

Mainblades was found in the year 2017 by our three co-founders Mark Terheggen Dejan Borota and Jochem Verboom. Before that time, Mark, an active pilot for KLM was running his own commercial drone footage business. Upon hearing of experiments with drones for aircraft inspections at EasyJet in 2014 he directed a proposal to KLM – prompting a first demo in 2015 and a pilot project in 2016.

This project began by conducting drone inspections on Boeing 737 aircraft. The tests simulated that aircraft had damage due to lightning strikes. On the ground, program manager E&M Peter Hof and maintenance program engineer Frank Laurenssen had the chance to get first-hand impressions of how easy visual aircraft inspections can be. The idea for aircraft drone inspections was born.

During this time TU Delft alumni Dejan and Jochem were still involved with other robotics companies, building security robots and ship hull cleaning robots. Both met each other in Zurich when they were studying. Back in the Netherlands, they followed a course for start-ups at business incubator YesDelft. Their curiosity to put their robotics expertise and skills together and find applications in other industries brought them to the aviation sector. Their TU Delft connections eventually introduced them to KLM. Pitching the idea for robotized drone inspections, Dejan and Jochem eventually met drone entrepreneur Mark in 2016. Deciding to partner up and building an automated solution for this application they officially found the company in 2017. Mainblades was born.

Today, our team consist of 20 passionate engineers, aviation geeks and coffee lovers that work hard to make drones operational in hangars around the world. Not an easy task. As a start-up, resources are limited. Of course, Covid – the industries’ biggest crisis – didn’t help either. At least that’s what we thought initially. However, it actually opened many doors for us. Digitalization, automation and data exchange all of a sudden became very important which forced airlines, MRO’ and OEM’s to really look towards innovation for cost-saving aircraft maintenance solutions.

In 2020 we therefore really pushed our tech teams; the guys worked very hard. We needed to make visible progress as a handful of companies were eager to try out our solution.  Luckily, more than ever, operators and MROs offered to open up their hangars to facilitate the actual usage of our technology: to save time, to increase quality – you name it.

With the the product maturing, we started visiting first prospects across two continents. We went on a big demo roadshow showcasing our technology to airlines and MROs in Germany, Luxembourg, Belgium, the Netherlands as well as the United States. Intensive weeks for our teams, yet very successful visits with lots of positive feedback. During this time we made big leaps on the technology side.

But not only the product grew. Since 2017, we’ve also experienced a lot of growth as a company and as a team. From the beginning, we have chosen to stay independent with a small team, as opposed to industry standards that recommend fundraising and quick hiring as the only path to success. In fact, many who started as interns back in the days have stayed on as full-time employees to this day. We are thrilled to have created distinct departments where everyone has found their place. Working together day in day out with like-minded and motivated people is inspiring. Even after 5 years, everyone who joins the company is part of this vibrant family. We breathe innovation and want to inspire our customers to feel the same way.

We came a long way as a small startup. But here we are in 2022. A mature organization with a growing team and strong partners on our side. What started as a proof of concept has resulted in a product that we are confident and proud to showcase to customers. It feels rewarding to see that more and more industry players are starting to recognize this as well.

Thus, in the coming months many exciting things therefore lie ahead for our team. Fully certifying our drone for Part 145, kicking off a new project with Lufthansa Technik on the Philippines and pushing our software on the Machine Learning front. In the meantime, together with our strong partner KLM Engineering & Maintenance we continue to make visible progress getting drones fully operational. Whether that is by working out new use cases, performing regular inspections or training new personnel. We make it work.

Overall, we are happy to say that five years later, Mainblades is stronger and more solid than ever. Ready to take up new challenges and make new users wow. To everyone that has been part of this journey: Thank you for having helped us become what we are today.

Up to another 5 years! Mainblades anniversary