This is where aircraft lightning strike damage occurs 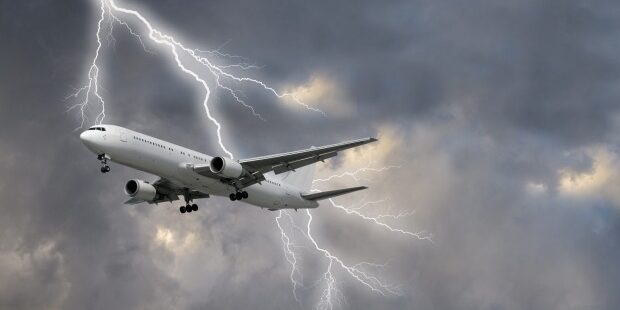 Lightning strikes are a daily occurrence on planet Earth and aircraft are not immune to it. Over the last months, how many times have you heard about aircraft that have experienced lightning strikes? Despite making to the news, none of these events usually lead to major accidents. However, aircraft may still sustain lightning strike damage, as you will learn here.

Lightning strikes rarely pose a threat due to the protection incorporated into the aircraft and its electronic components. That is why, in the event of a lightning strike, the result can range from little-to-no-damage. The duration and the energy level of the strike will determine its impact on the aircraft.

Lightning strikes usually affect the aircraft’s external surfaces at the entrance and exit points. Thus, a post-lightning strike inspection by zones is required, as the aircraft may present pits, burn marks, or holes, sometimes as small as a pencil tip, that can lead to pressurization loss or cracks. It is a laborious and time-consuming process that requires multiple personnel and from 8 to 12 hours to complete.

Another indication of a lightning strike is damage caused to the aircraft’s components such as electrically controlled fuel valves, generators, power feeders, and electrical distribution systems. Although designed to withstand the occurrence, the electrical system of the aircraft can become magnetized due to the high intensity of lightning strikes.

At Mainblades, we believe that a solution that enables timely damage assessment post-lightning strike is a vital part of an effective aircraft inspection throughout the aviation industry and particularly Maintenance, Repair, and Overhaul (MRO) companies and organizations. With that in mind, we have developed an automated drone-powered inspection tool to help identify potential issues and address these in a much faster, easier, and safer manner.

The direct effects of lightning strikes on an aircraft by zones
September 7, 2020
Revolutionizing aircraft inspections with drones
See how!
This might interest you
Go to Top