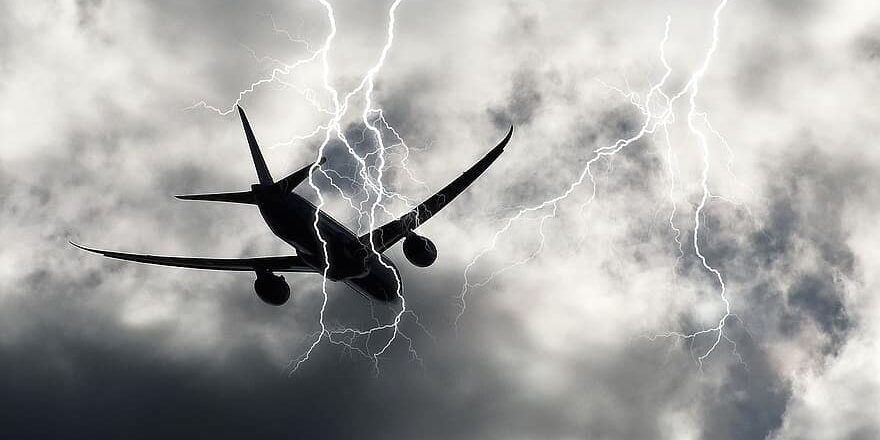 Aircraft are protected from the lightning activity, which is more frequent passing through the clouds during the climb and descent phases of flight. First, most of their external parts are metal composed, with sufficient thickness to resist lightning strikes. This ‘metal skin’ offers the aircraft its basic protection, while also controlling the entrance of electromagnetic energy into the electrical wires of the airplane, keeping it at a sustained level without damaging the aircraft.

Second, the ‘skin’ around the cabin and interior compartments are designed with a metal mesh that goes all the way through to provide an additional layer of protection. Based on the principle known as Faraday cage, the system consists of providing a path for the electric charge of the lightning bolt to enter the aircraft at one extremity and exit at another, ensuring that the occupants remain safe in the cabin.

A new method of lightning protection of aircraft?

Lightning protection of aircraft is always evolving. A new study published by several researchers from the Massachusetts Institute of Technology’s (MIT) department of aeronautics states that if aircraft were equipped with a mechanism that would electrically charge it internally, the threat of being struck by lightning would be reduced.

Their theory stems from their analysis of what occurs when an aircraft flies through an ambient electric field. According to the experts, the aircraft’s external electrical state becomes more polarized with one end of the aircraft becoming more positively charged and the other becoming more negatively charged. The increased state of polarization can set off a positive leader, which the researchers describe as a highly conductive flow of plasma that can serve as a preceding stage to a lightning strike.

The study proposes the future use of an onboard system that could better protect an aircraft from a lightning strike by electrically charging it. “The idea is to have electric field sensors on the aircraft that continuously monitor the electrical environment the vehicle is subjected to. From these measurements, onboard algorithms would determine the risk of a strike and the net charge level of the aircraft required to improve the situation”, explains Carmen Guerra Garcia, an assistant professor of aeronautics and astronautics at MIT.

Furthermore, “the onboard controller would then command the actuators (ion emitters that can charge the aircraft) to drive the aircraft to the optimum net charge level, which keeps equal safety margins for the positive and negative leader, thereby reducing the risk of a strike”, she adds.

Your guide to general visual inspections of aircraft
September 24, 2020
Revolutionizing aircraft inspections with drones
See how!
This might interest you
Go to Top